I’m currently sporting bruises and scrapes in numerous places all over my body: arms, shins, wrists, bum. You will not believe how I got them.

The boys and I were playing at the park the other day. It was gorgeous weather,  just the perfect temperature to be outside. We’d brought snacks along and intended to make the most of the morning. Suddenly, out of nowhere comes this little boy we’ve never seen before on one of those battery-operated Jeeps for  kids.

“It won’t stop! Make it stop” he screamed.

A good deal farther back was his very pregnant mom who was doing her best to catch him, but the odds were not in her favour.

My instincts kicked in immediately and I swiftly dismounted from the monkey bars, quite smoothly except for grazing my left forearm against the support railing. I didn’t feel a thing because when you’re being a hero, you ignore all pain. I hurdled over the springy airplane riding feature, banging my shin in the process. I dashed to the pathway and the run-away motorist.

Have you ever tried to stop one of those mini-Jeeps? Neither had I. He was moving at a good clip, but I caught up and was running alongside him.

“Press the brake! The brake!” I shouted.

I grabbed the back to make it slow down, but that kid clearly had cruise control locked on “fast”. He was heading towards a hill which could have been advantageous except it was on a decline. With little time to think, I did what any hero would do: I jumped in front and stopped that Jeep with my own body.

Everyone at the park dashed over, clapping and cheering. Eventually his mom caught up to us and through tears of relief thanked me for intervening.

It was unbelievable. And I have the bruises to prove it. Unbelievable I tell you.

Alright, alright. I wish I had an amazing story to explain all my recent injuries, but sadly, I do not.

Are you ready for the real story?

We were biking down the street and out of nowhere a baby stroller came careening down a driveway. I jumped off my bike, remembering to put the kickstand down first, and bolted —-

Alright, that’s not what happened, either.

Fine, the truth. I was washing the front windows and heard a cat meowing plaintively across the street on the neighbour’s roof. A vicious, probably rabid, racoon had it cornered. I threw down my washcloths and sprinted over, dodging several cars on my way —

We were playing Smurf Tag at the park and I slipped on the mulch, scraping my shin in the process (couldn’t shave for three days while it healed).

The bruise on my bum and the scrape on my right arm were due to falling off a stationary scooter. I wasn’t even moving.

Finally, we were playing Canadian Ninja Warrior Tag at a different park and as I tried to elude Bearded Husband (the boys were playing, too, settle down) I slipped on the wooden railing, banging my left forearm, right shin (again) and the back of my right knee.

Nothing glamourous about those injuries, but I did live to tell the tale.

*If you’d like to read a true and entertaining injury story, check this post “Told You So” by Amanda over at http://www.mandiemarie.com – I like to call it “Line Drive of Doom”.

Self-diagnosis can save you a lot of unnecessary time in medical offices and those bothersome things like “medical diagnosis” and “prescription medication”. But it doesn’t always work in your favour. Trust me.

I am a big believer in googling any and all medical issues.

Wake up and can’t raise my left arm comfortably? Google it.

Suspicious my eyebrows are not symmetrical? Google it – there must be a serious medical condition causing that. Recent attempt at self-grooming is irrelevant.

Baby suddenly does not like bananas? We must check Google should it be a rare tropical disease he picked up at the park.

But even I draw the line at self-diagnosing broken bones. My bearded husband, however, does not.

“You know, I worked in a clinic for years. I think I’d know if it was broken.” Yes, I would think that. And I’d be wrong.

Last summer, in a fit of rage at the former owners of our house and their questionable gardening choices, he ripped up a metal rail (it also goes by some more colourful names). In disgust, he tossed it on the patio and did some other outdoor maintenance. A short while later, he jogged through the yard to get a tool and tripped over the cursed rail, landed face first with his left index finger taking the most impact.

Concerned about the swelling and immobility, I gently suggested he see the doctor, a real one.

A few days later, I suggested it again, since this injury was seriously limiting his diaper-changing abilities. And dishwashing.

The finger inspired imitations by the boys. “Look, I’m Daddy opening the jam.” “Look, I’m Daddy changing the radio station.” All this was done with the offending finger extended gingerly. It was top notch material that was lost on Bearded Husband.

A few months passed and finally he agreed that a visit to the doctor might be necessary. One x-ray later it was revealed that the finger was broken. Shocking.

That diagnosis was life-changing. Now we needed to schedule in time for Finger Physiotherapy. It’s a real thing. A “one hour, twice a week” kind of real thing.

Until they come up with google.com/bodyscan, trust me, go see the doctor. 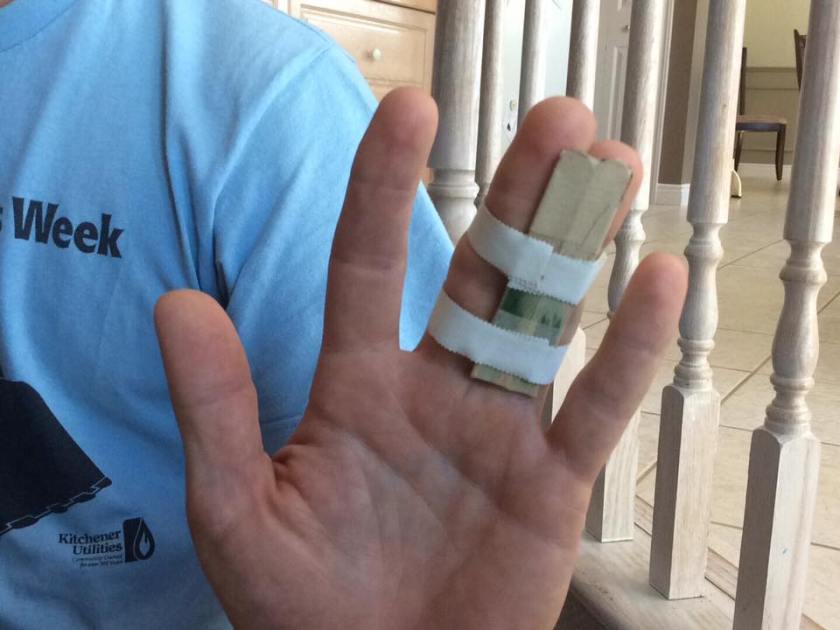