“I don’t know what happened. Everything was going fine and then the youngest brother was eliminated in a round of Spoons.”

Fear was ignited in a residential home Sunday afternoon. Witnesses say they had no indication that things were about to go so sideways.

Says one participant, “There was laughter and smiles and then suddenly things turned violent.”

The father of the alleged perpetrator said that although his son is generally even-tempered, he has been known to lash out when frustrated. “But never so quickly or viciously,” dad added.

That may explain this seemingly sweet preschooler’s reaction when he lost a round of a classic game.

According to his older brothers, the family was learning a new game their mother claimed was “super fun” and one that her “family played all the time on Sunday afternoons.” The boys added that she wasn’t allowed to watch television on Sundays growing up, so her idea of “fun” might be slightly skewed. They did admit that they were enjoying this new game.

“It was the second round, another sibling had already been eliminated. Mom got four-of-a-kind and quietly grabbed a spoon. The rest of us followed suit and that left the youngest one spoon-less. That’s the way the game works, we don’t play favourites or let anyone win in our family. Mostly,” the oldest brother recounted.

“As soon as he realized he was the only one without a spoon, he turned and hit Mom on the leg. And that’s when we all knew the truth. He was a poor loser.” 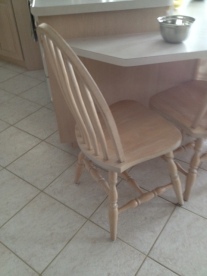 In an effort to turn things around, the family moved on to another classic game, Musical Chairs. Sadly, this also ended in violence as the tiny ankle-biter turned his wrath to other members of the family when he was unable to claim a chair as the music stopped.

“He just couldn’t handle being eliminated. He kept promising to change, but finally we had to exclude him from a round. Then two,” said his dad.

Thankfully, no one was permanently injured in these attacks, but the family says they will be focusing on social skills development and sportsmanship over the next few weeks.

“We just don’t want him to be a poor sport to anyone else,” said the mother. “We aren’t that kind of family.” His mother was not available for further comment as she was busy tweeting about the incident.

This just in: Family Games a Day took a dark turn when the 4YO was eliminated in a round of Spoons.

Despite the family’s assertions that they are a peaceful group, the youngster’s grandparents tell a slightly different tale, describing their young grandson as “feisty”.

“We aren’t all that surprised,” said his grandfather. “His mother was very much like that at this age and used her cuteness for evil. We will just keep hoping for the best and keep our distance when it looks like he might be losing. There are no elimination games in our near future.”

As for the rest of the family, they have no plans to cease game-playing at this time.

Two year olds do not know how to play Go Fish.

That will not stop a two year old from wanting to play Go Fish or insisting on playing Go Fish.

You will agree to it because a) he’s cute and b) you’re a good parent.

To play Go Fish with a two year old you will need the following:

Once you’ve gathered up your supplies, it’s time to deal the cards. Five, seven, four, it doesn’t matter how many because you are playing against a toddler. The other opponent might care, so do make an effort to pretend to count them out.

Little, ask Big if has an eight. No? Ok, then go fish. Pick up a card. Yes, you. Just one card. One. ONE. The top one. Now hold it with your cards. In your hand. You don’t need to pile them, keep them in your hand. Hold them, hold them. HOLD THEM.

Little, do you have a four? Yes, you do. It’s right there. I can see it. You need to give it to Mommy. Yes. Yes. Yessss. It’s okay, you’ll get another card. No, not yet, your next turn. Just wait. Wait. Big gets to go now.

Mommy, do you have a three? Thanks.

Little, you have a pair. They match. Put them together. Yes, together on the floor. You make a pile. Oh, look! See? They are the same. Yes, they are. No, you don’t hold them now, they go there. Right there. Right. There.

Okay, Big does have them same card, but that’s his match. They stay in his pile. Yes, they do. No, not Little’s. You have your own, see? Those are Big’s. He keeps them.

There is no round three.

Ever try to play games with young, ego-centric children? How did that go? Was it a glass or a whole bottle of wine experience?