Our staff decided to celebrate the last day of school with an Ugly Christmas Sweater Contest. As unbelievable as it might sound, I do not own one. When I asked around, my friend suggested an idea from Pinterest. I’m not very handy with sewing or stitching, but I can hold my own with a glue gun. So I eagerly gathered up my supplies, popped in a movie for the boys and got started on what was sure to be the winning sweater. 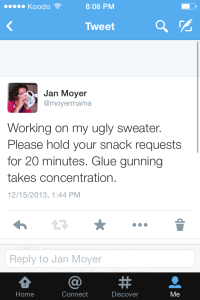 Things were going relatively well, but I considered other options. The glue gunning was replaced with my stapler – made sense.

I soon discovered that I couldn’t accomplish this on my own. The clear choice was to use the four-year-old as my stand in. It would have worked better if he had stood still.

Staples, a glue gun, and a four year old. There was no way this sweater would be anything less than spectacular.

The big day was approaching when disaster struck in the form of the stomach flu. At the time of publishing, four out of six family members had been hit. This meant I could not participate in the contest! Or did it?

Turns out, you can wear an Ugly Christmas Sweater anywhere, any time. It’s true. IT IS.

I now present to you: The Ugly Christmas Sweater Pinterest Fail – Home Edition.

This is what it was supposed to look like:

I was quite pleased with my version and it’s versatility.

What’s the best thing you ever made?