There is a woman in the US who is my American counterpart. It is eery how parallel our lives are and also our fondness for laughing at ourselves. Katherine puts the extra “u” in “humour”.

You can find me over there today, pinch hitting my Five Uncomfortable Truths. While you’re there, be sure to check out her posts (might I suggest other UCT to begin). And you can find her on twitter @grass_stains

This adventure began with a simple tweet from a nice guy encouraging the sale of his friend’s new book:

Obviously, I could not pass up this opportunity to hear from a Twitter friend in real-life.

July rolled into August and I finally remembered to have my credit card handy when I was at the laptop while the boys were distracted by “Wild Kratts” or “Shawn the Sheep” or something. I ordered the book, now it was time to collect my song. 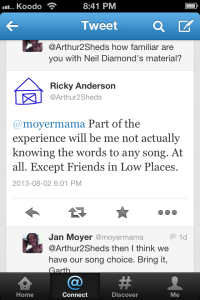 Tweets and emails were exchanged and Ricky had my number. I tried out a few apps to see if I could record the phone call, strictly for posterity’s sake, but realized I would not remember all the necessary steps and thought I’d just record it with the camera or Bearded Husband’s phone. Posterity is overrated anyways.

All I had to do was wait.

Friday night BH and I were having date night at home (a little thing we started to spend more — never mind, you came here to read about the day Ricky called, not date night). I turned to BH as we sat on the couch.

I said, “I might get a call from Ricky.”

He heard: “Do you wanna have a quickie?”

Later, when I stopped laughing, I got an email that Ricky would call the next day. He wrote something in Spanish, which I don’t speak (I’m Canadian, we speak English and sometimes French), so when I read “Mañana” I thought he had changed the song to that one by the Muppets. Equally good in my opinion.

I convinced myself that I just needed to make sure my phone was charged and the call would happen when it happened.

Dinnertime arrived. I had five boys to feed on the patio (Neighbour Kid was spending the afternoon with us) and BH was hiding somewhere in the house. We had just recovered from a milk spill and an over application of soya sauce. We thought the toddler was stockpiling basmati rice in his romper then realized it wasn’t rice shaking out of his pant leg, but rather an exploded diaper. Curse you, non-toileting child.

The phone rang and I knew, I just KNEW without even looking at the display, that the time had come. Ricky was calling. I threatened all the blood related boys with no dessert (this I accomplished with simply a dirty look) and politely said, “THIS IS MY CALL. SIT DOWN AND STOP MAKING FART NOISES, but not you, Neighbour Kid, you’re the good one.”

It was my most Lucille Ball-like moment to date. I dashed for the door to get the camera, furtively looked at my phone, weighed the pros and cons of trying to archive this moment. Decided to just play it cool and answer it. I swiped the phone screen. And swiped again. And swiped AGAIN. IT’S GOING TO GO TO VOICEMAIL!  Steady, steady, sweaty hands will do that.

“Hi, is this Jan?” said a friendly voice.

“Yes, it is.” I replied (I doubt he heard my nervous giggle).

And then I heard the most beautiful rendition of “Friends in Low Places” that I will ever hear. It was like an angel singing about beer and whiskey directly from the pearly gates. And Ricky wasn’t chintzy. He sang the entire song. Be still my heart. I thought I’d see him swoop in from a zip line directly into our backyard, for real.

We all clapped and cheered (okay, mostly me and the toddler). And Neighbour Kid asked me, “was that a real person?” I know, bud, I know. How could such melodic tones be from a mere human?

I thanked Ricky for the call and reassured him that I did not record it. I’m sad about that, but maybe some things are better when they live on in your memory.

Immediately after I hung up, BH reappeared.

I said, “I just got my call from Ricky!”

And I didn’t care what BH thought he heard. I got my call. And my song.

Your turn – are you a peanut or plain M&Ms person? Bo or Luke Duke? Coke or Pepsi?

© Janice Moyer and Tough Bananas, 2013. Unauthorized use and/or duplication of this material without express and written permission from this blog’s author and/or owner is strictly prohibited. Excerpts and links may be used, provided that full and clear credit is given to Jan Moyer and Tough Bananas with appropriate and specific direction to the original content.